The role of art in the New Court Amsterdam Inspiration business

The new courthouse opened in Amsterdam in May 2021. The building has 10 storeys and more than 47,000 m2 of offices, courtrooms, interrogation rooms and a detention area. The impressive art collection at Amsterdam courthouse is mounted throughout the building, using Artiteq’s integrated hanging systems.

The New Courthouse has been designed, built and is managed by a Public-Private Partnership. The NACH (New Amsterdam Courthouse) consortium is a collaboration between Macquarie Capital, ABT, DVP, KAAN, Heijmans and Facilicom. Project architect
Lisa Goes from KAAN Architecten, and project manager Leonie van der Waard from Facilicom, explain this impressive project.

As project architect, Lisa Goes has worked full-time on the New Courthouse project for almost five years. Lisa: “The courthouse wanted to be visible, recognisable, authoritative and functional. That resulted in a distinguished building that is distinctively transparent and accessible at the same time.”

Transparency and visibility were important cornerstones of the design. “The building opens itself up to society. A courthouse would usually contain a foyer surrounded by various courtrooms and chambers. When designing this building, we turned this principle upside-down. The visitor waiting area consists of foyers that are located against the large windows of the outer walls. The chambers are therefore in the centre of the building and the waiting area is structured around them.” 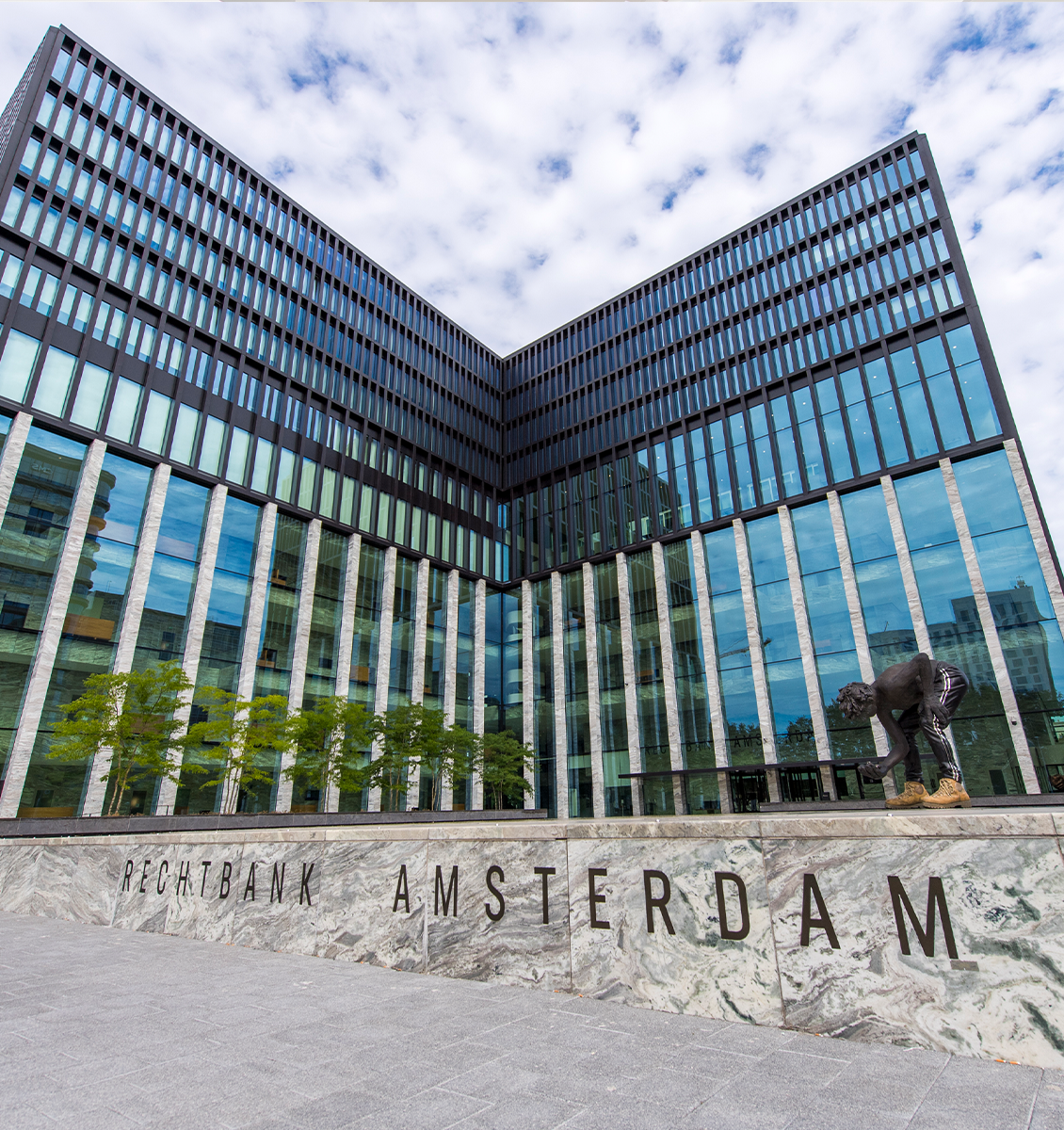 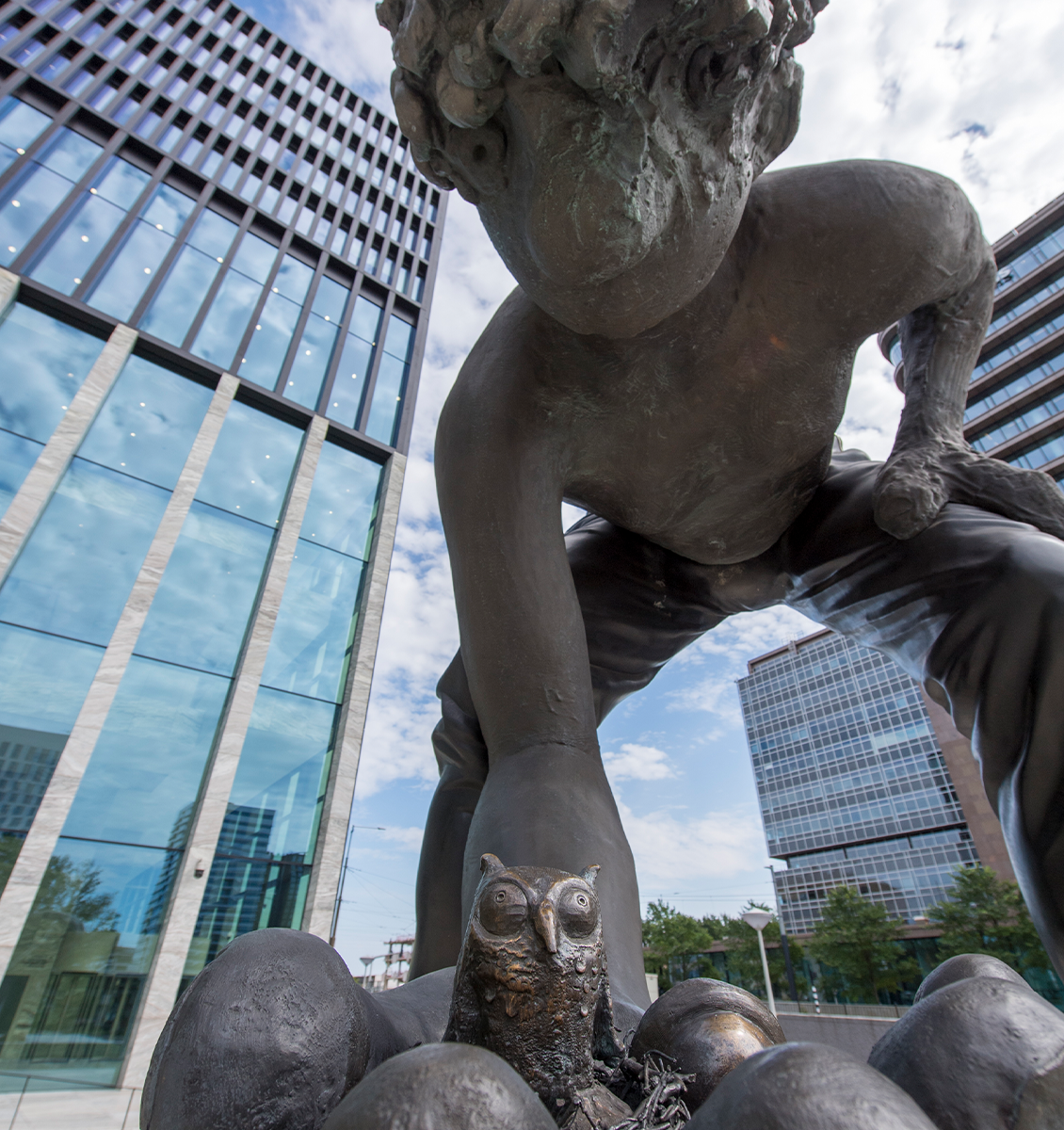 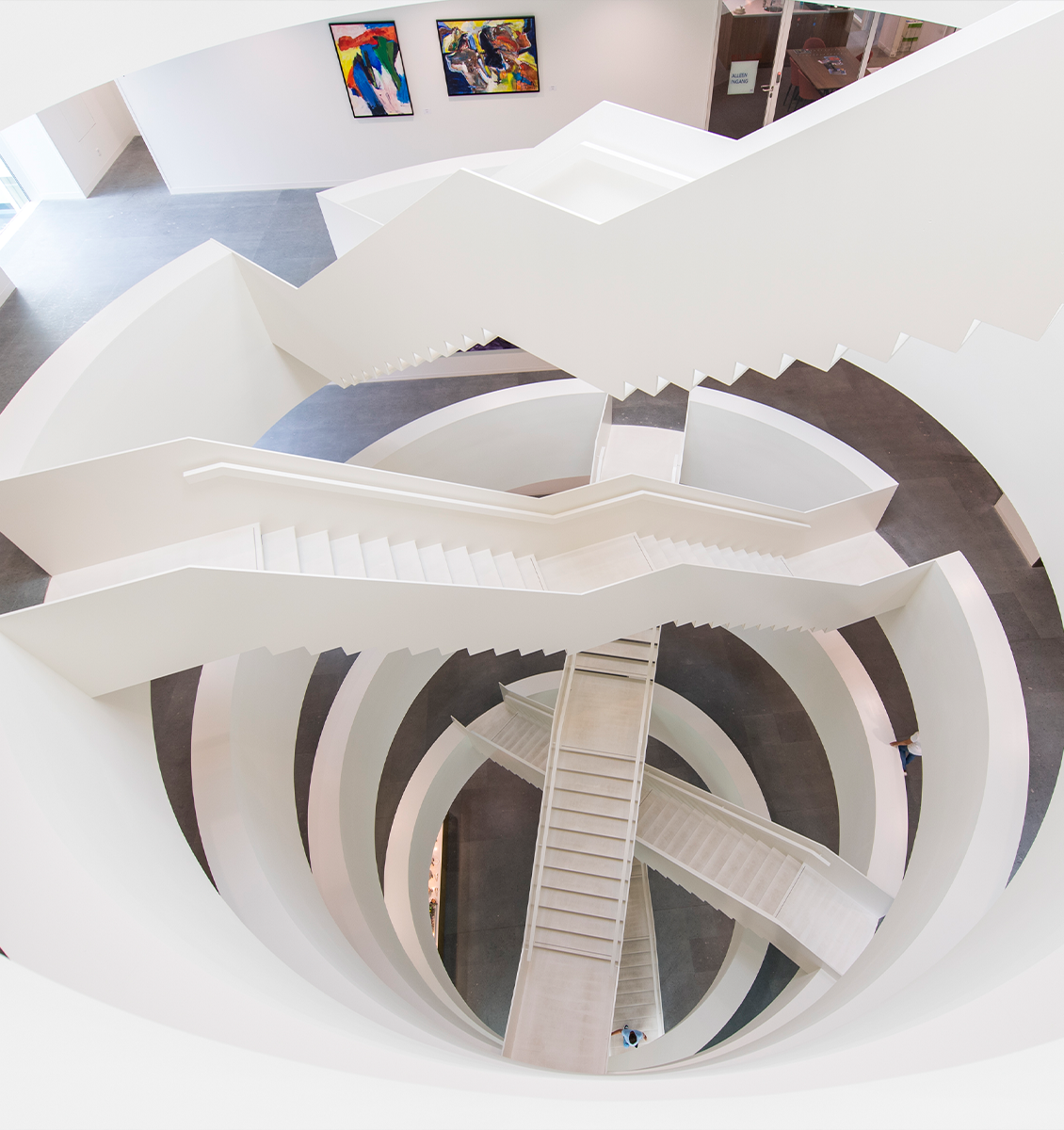 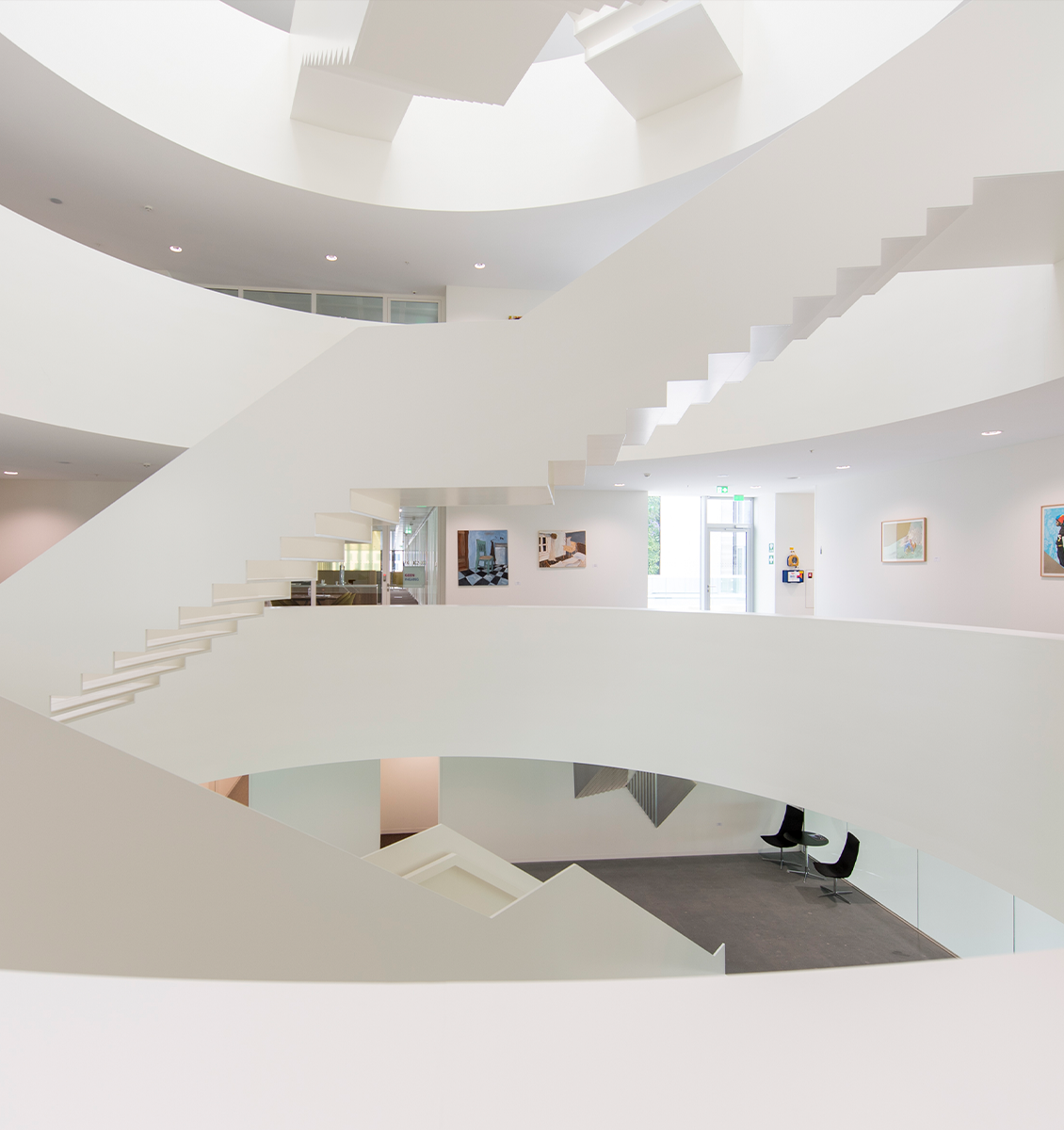 The New Courtroom has been tendered by the NACH (New Amsterdam Courthouse) consortium in accordance with the DBFMO principle (design, build, finance, operate and maintain). Lisa: “The idea behind this construction is that, as a consortium, you don’t just design and deliver the building, you also maintain and manage it for the next 30 to 40 years. It was therefore a very special project. You design and construct the building differently. Distinct choices are made, for example in terms of sustainability.”

The role of art in the courthouse

Sustainable wall management also plays a role in this. The courthouse has an extensive art collection. The law also requires that a percentage of the construction budget is spent on new artwork. Lisa: “Along with the courthouse’s art committee, I have been involved in installing artwork from the courthouse’s own collection in the new building. The committee sees art as a way of helping visitors cope with the situation. People are usually at a courthouse for an unpleasant reason. Art can affect the mood. Paintings can reassure, serve as a brief distraction or offer comfort.” 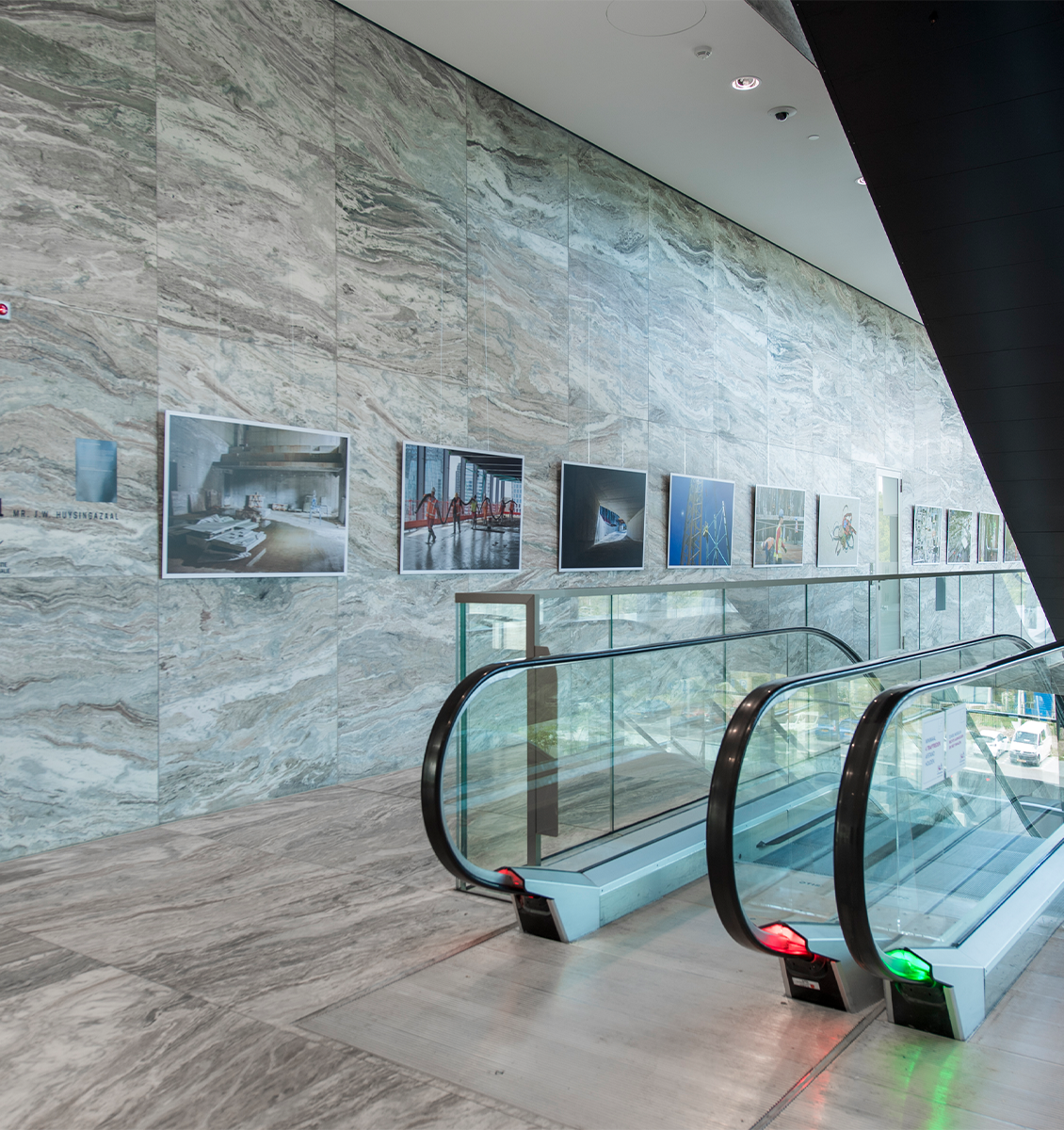 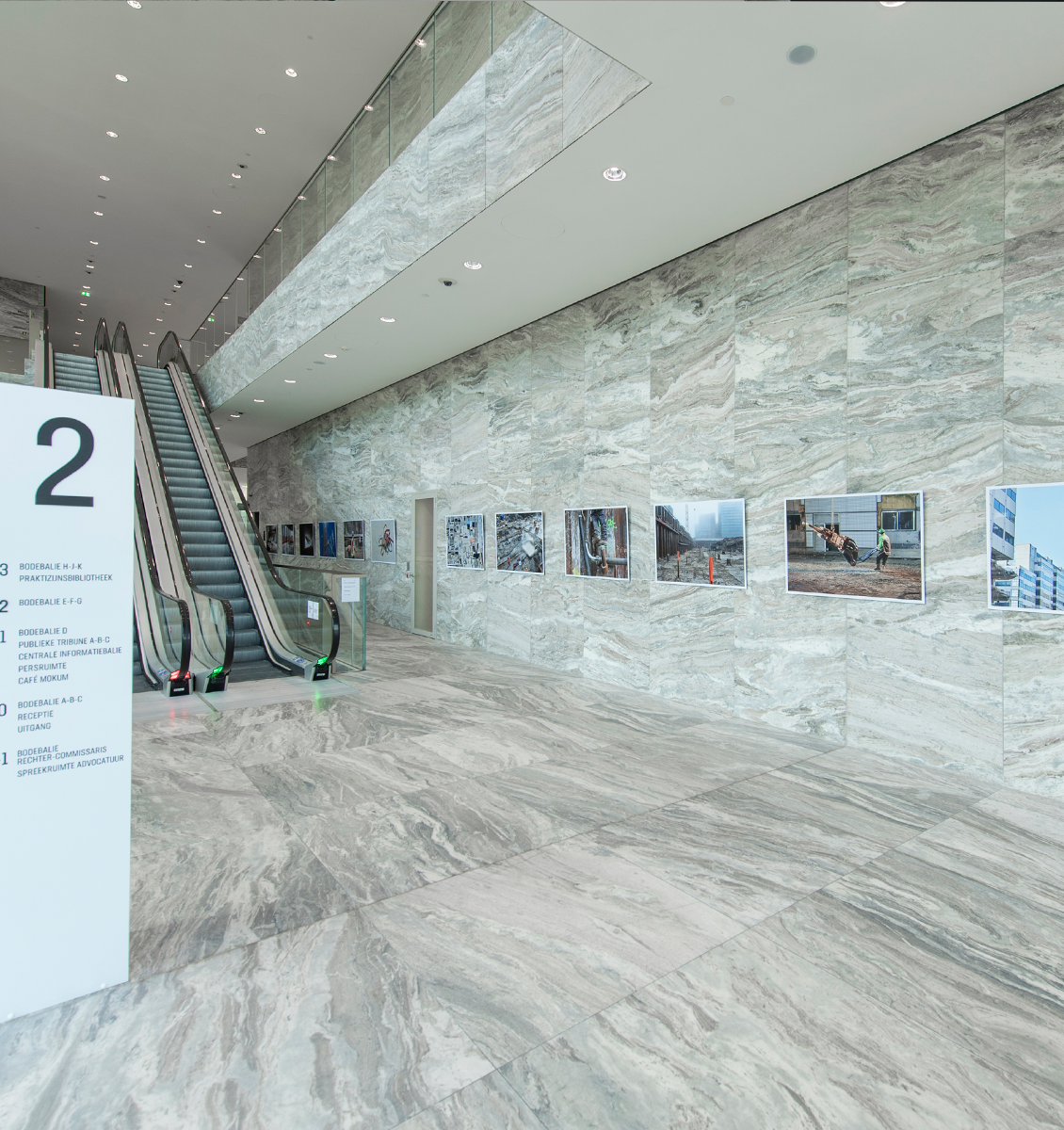 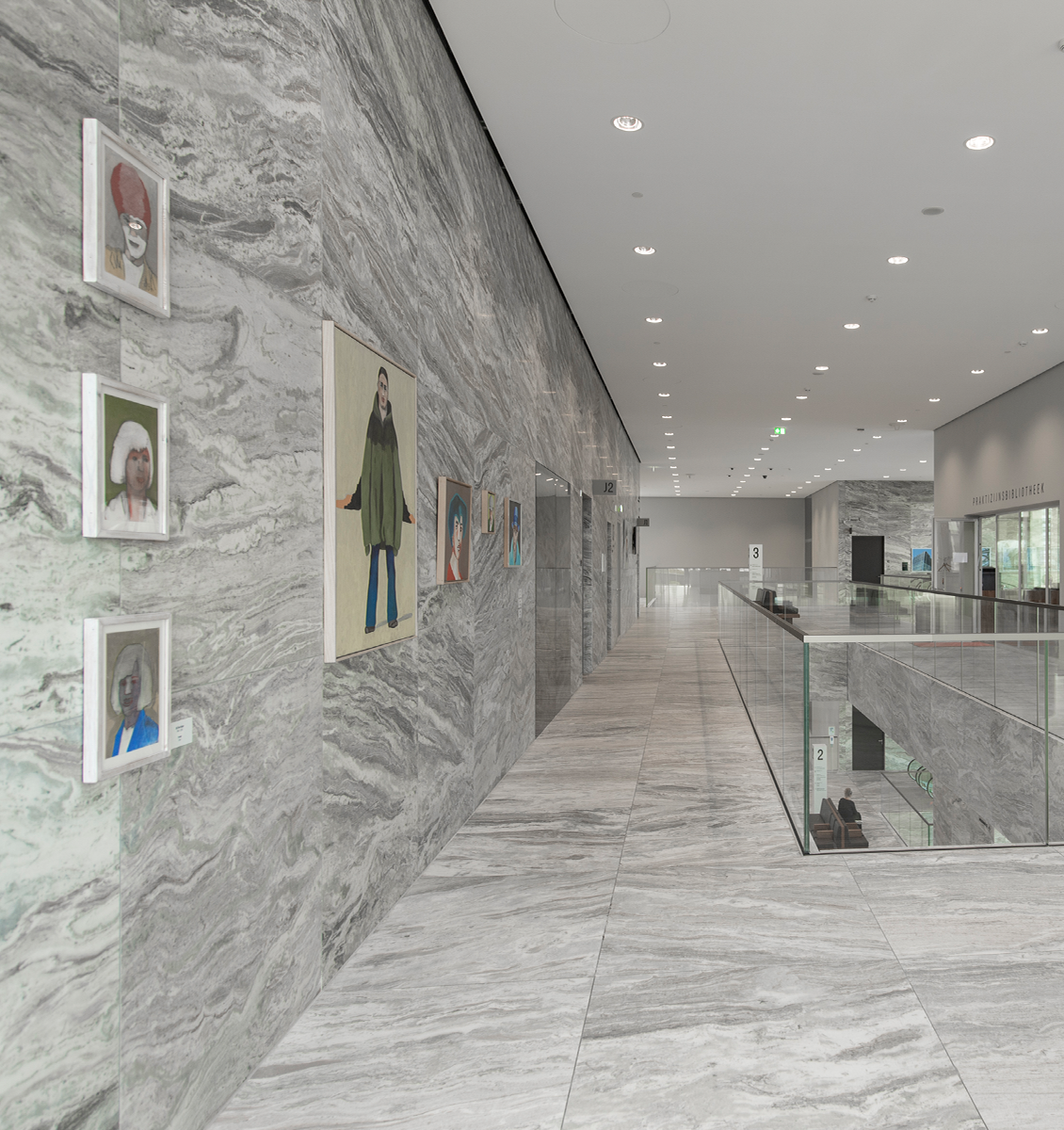 A number of works from the art collection have been given a permanent place in the courtrooms and foyers. The committee wanted to display temporary exhibitions in other areas of the building. Lisa: “As there was a clear desire from the very start of the project to incorporate art into the design, we knew early on where flexible hanging systems were needed. That is why we could involve Artiteq at an early stage of the process, and integrate the hanging system into the design.”

The temporary exhibition is positioned in a central location next to the escalators and will therefore be seen by large numbers of people. Here, the architect chose the Click Rail Pro in a special black colour. These rails have a carrying capacity of 50 kilos per metre. Lisa: “The foyer is covered in beautiful natural stone. The ceiling stands away slightly from the wall, creating a shadow gap. The rails are hung higher than the ceiling and, because they are black in colour, are barely visible. The aim was for the hanging system in this area to be almost invisible and we succeeded.”

Various Artiteq products have also been used in the interrogation rooms and offices in the building. Lisa: “In the interrogation rooms, ventilation edging slats have been installed for air circulation. Artiteq considered things from our perspective and designed adapters especially for these rooms that fit precisely into the vents. We can also mount art on these walls without disrupting the airflow.”

In addition, integrated hanging rails (Art Strip) have been fitted in the interrogation rooms. Finally, Artiteq has supplied 1,750 hooks and wires for the offices, where no holes can be drilled in the walls. Lisa: “These hanging hooks can easily be hooked over the special partition walls in the offices. This allows employees to easily personalise their workplace with their own art.” 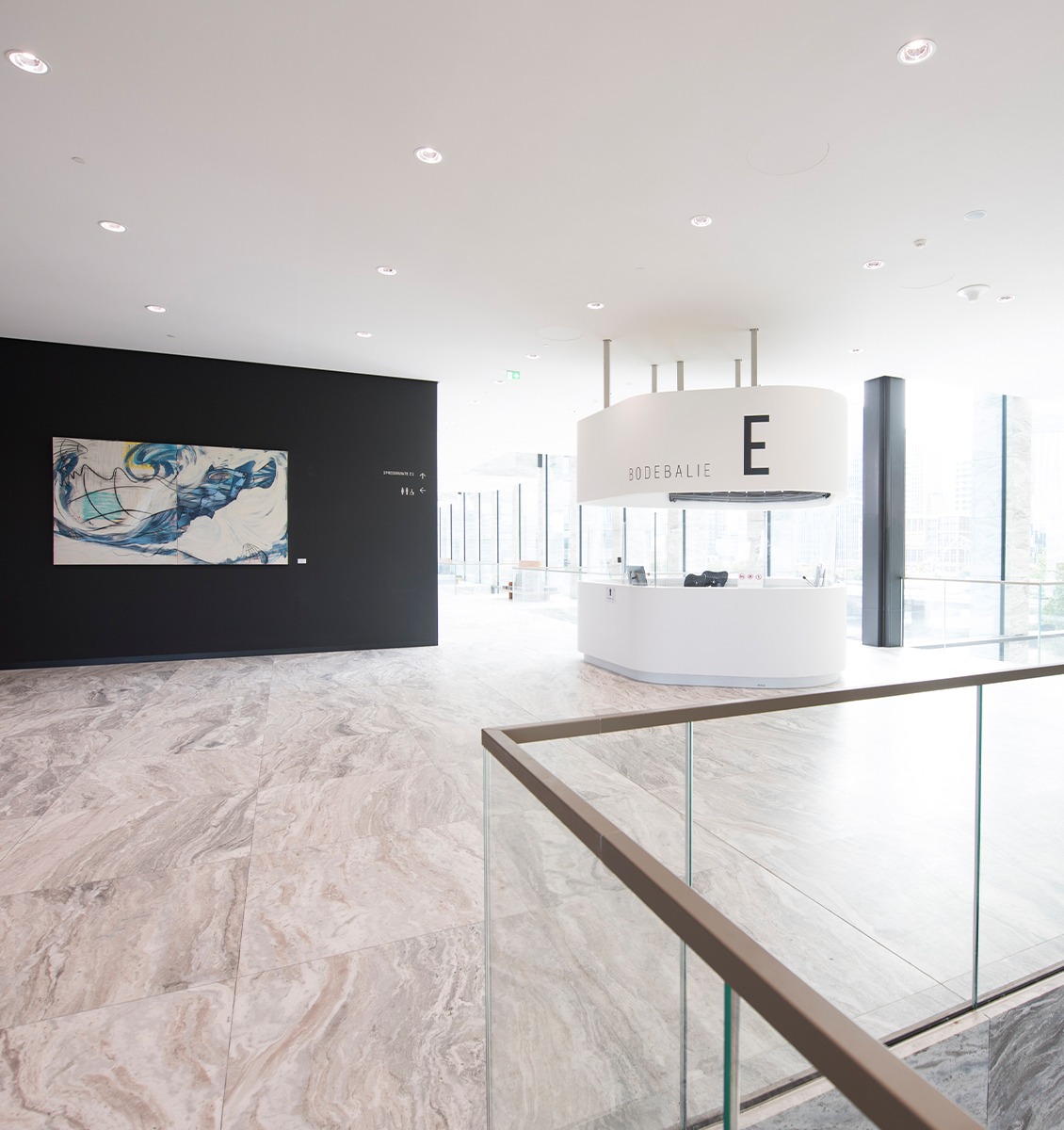 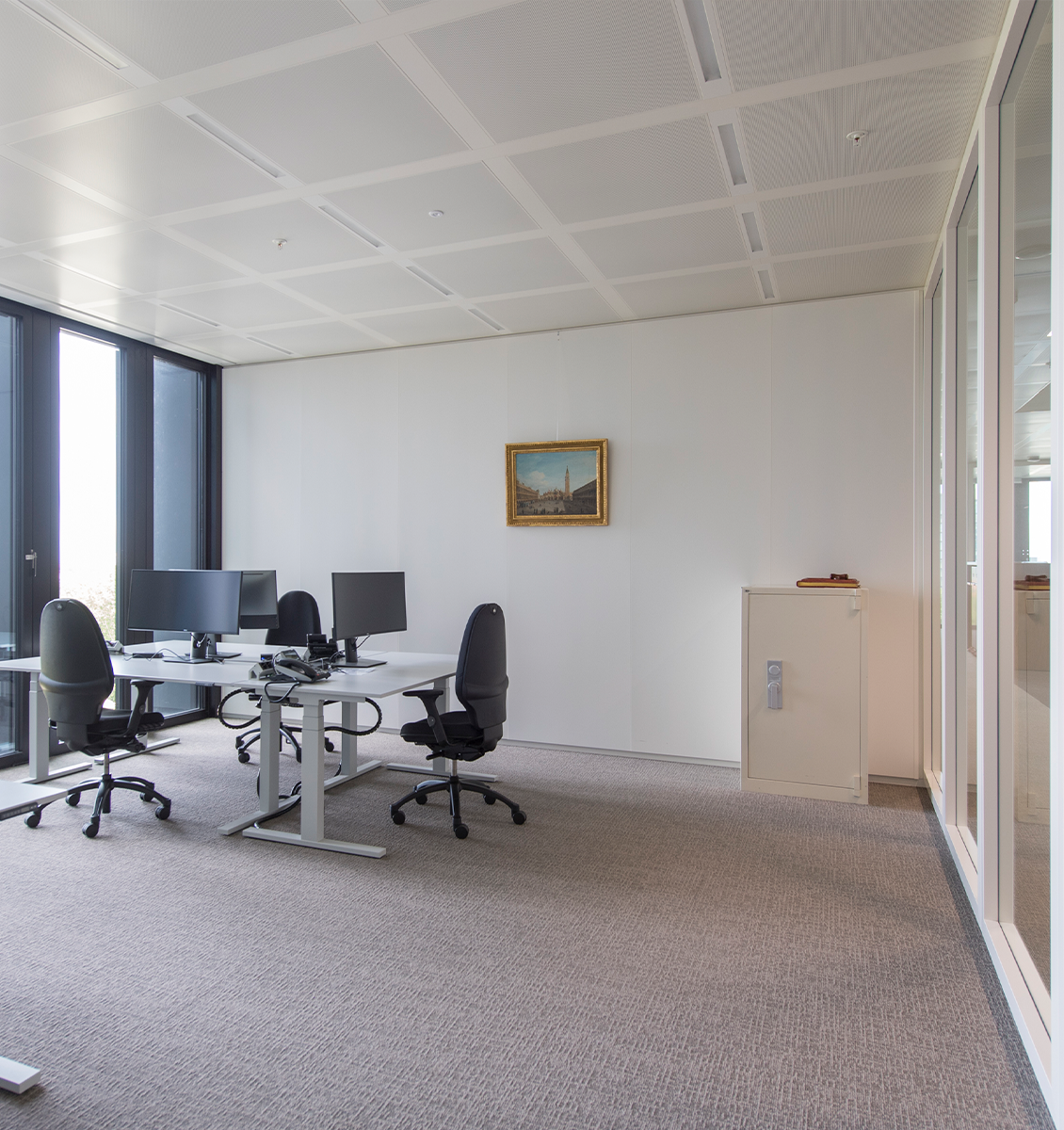 Relocation of the art collection

Leonie van der Waard from Facilicom is involved in this project as a project manager: “Working closely with Heijmans, Facilicom will take care of everything that makes the building a pleasant place to work, for the next 30 years. We arrange matters such as maintenance, acoustics, cleaning and solving service interruptions in the building.” Leonie’s responsibilities included coordinating the relocation and hanging the artwork from the courtroom’s collection.

Leonie: “The installation of the artwork went very well. The paintings in the central lobby were hung using a special extra-long ladder. Once the hooks and wires are properly secured in the rails, attaching the artwork is very easy.” Artworks are also hung on the walls in the offices. Leonie: “I helped to hang the art in the offices. The system is very user friendly and even the heaviest frames can be hung.”

The system meets the requirements perfectly

The courthouse is very happy with the functionality and appearance of the system. Leonie: “I was pleasantly surprised with Artiteq’s extensive range of hooks, wires and hanging solutions. There are also various options for heavier works of art. Artiteq really helped us to think things through.”

Leonie knows that the art committee is also happy with the result: “The system is perfectly in line with the requirements laid down by the committee in terms of flexibility. The temporary collection is hanging in a superb, prominent place. The exhibition in the lobby is changed every three months and that is really easy to do. In addition, every department has its own art collection. These collections are changed once a year. That is very simple to do and doesn’t involve a drill.”