Home chevron_right A look at a spot of interior design

A look at a spot of interior design

Bavon de Vor develops homes for clients throughout the Netherlands. A few years ago, the project developer decided he wanted to develop and build his own house. Bavon installed the Artiteq Shadowline Drywall hanging system throughout his home. This was much more than just a functional solution, it was actually a carefully considered aesthetic choice.

A wooden house surrounded by woodlands

Bavon’s beautiful detached house is close to Hilversum and surrounded by woodlands. “Our house is a wooden bungalow with a long tiled roof and zinc guttering,” says Bavon. “Timber-frame construction is not particularly common in the Netherlands, whereas it is more widespread in countries like Norway and Sweden.”

From the outside, the house has a traditional Scandinavian appearance, which fits perfectly in the natural environment. But inside, the design is ultra-modern. Bavon: “Visually, the interior of our house has very clear lines.

For example, we opted for a concrete floor and concealed all the skirting boards and door hinges in the walls.” “Wherever you are in the house, the large windows mean you are also in touch with the outside world. I thought it was important to incorporate nature into the design. I wanted to include the house’s location, but also the changing seasons, the changing light and the colour palette in our interior design.” 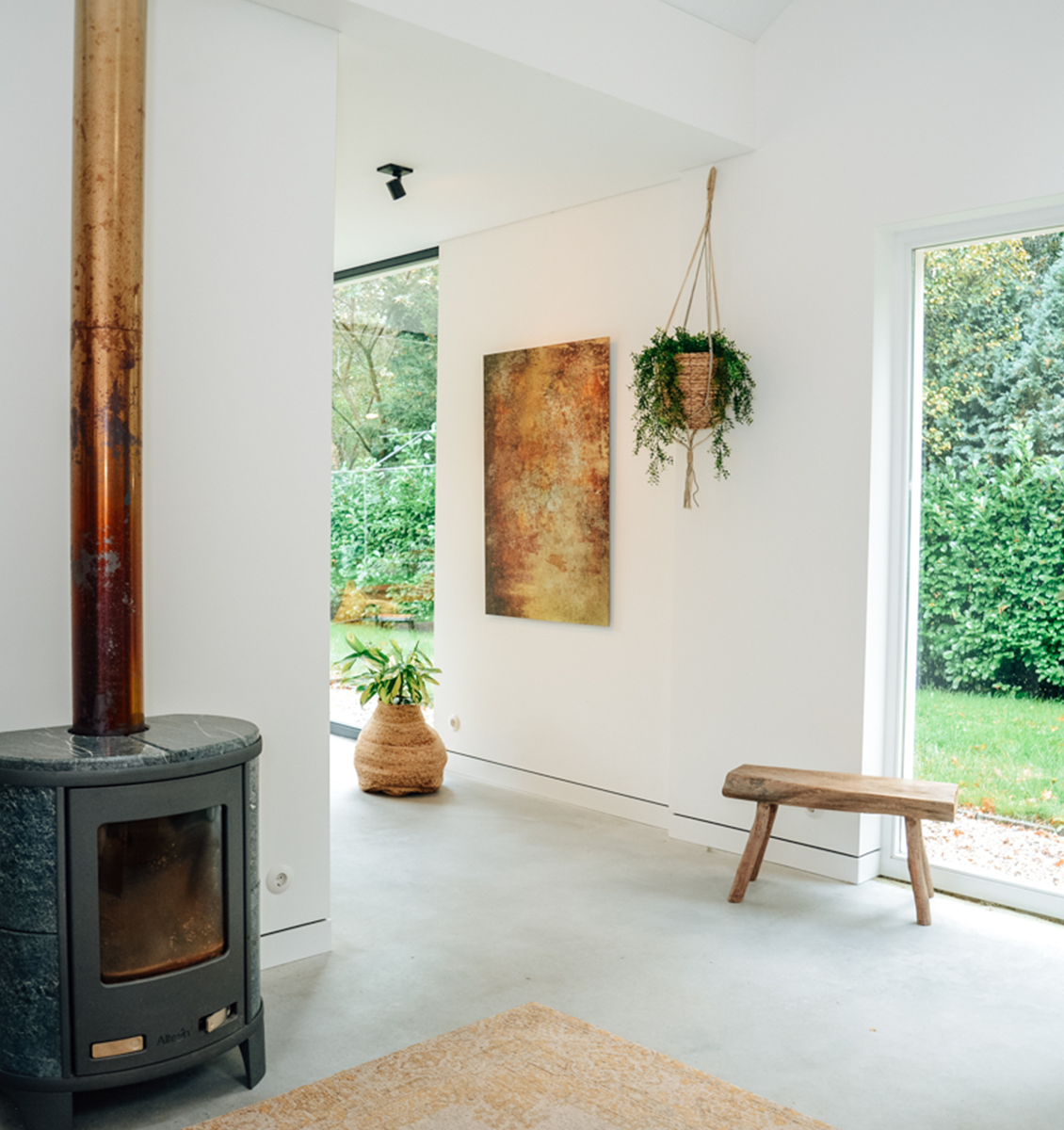 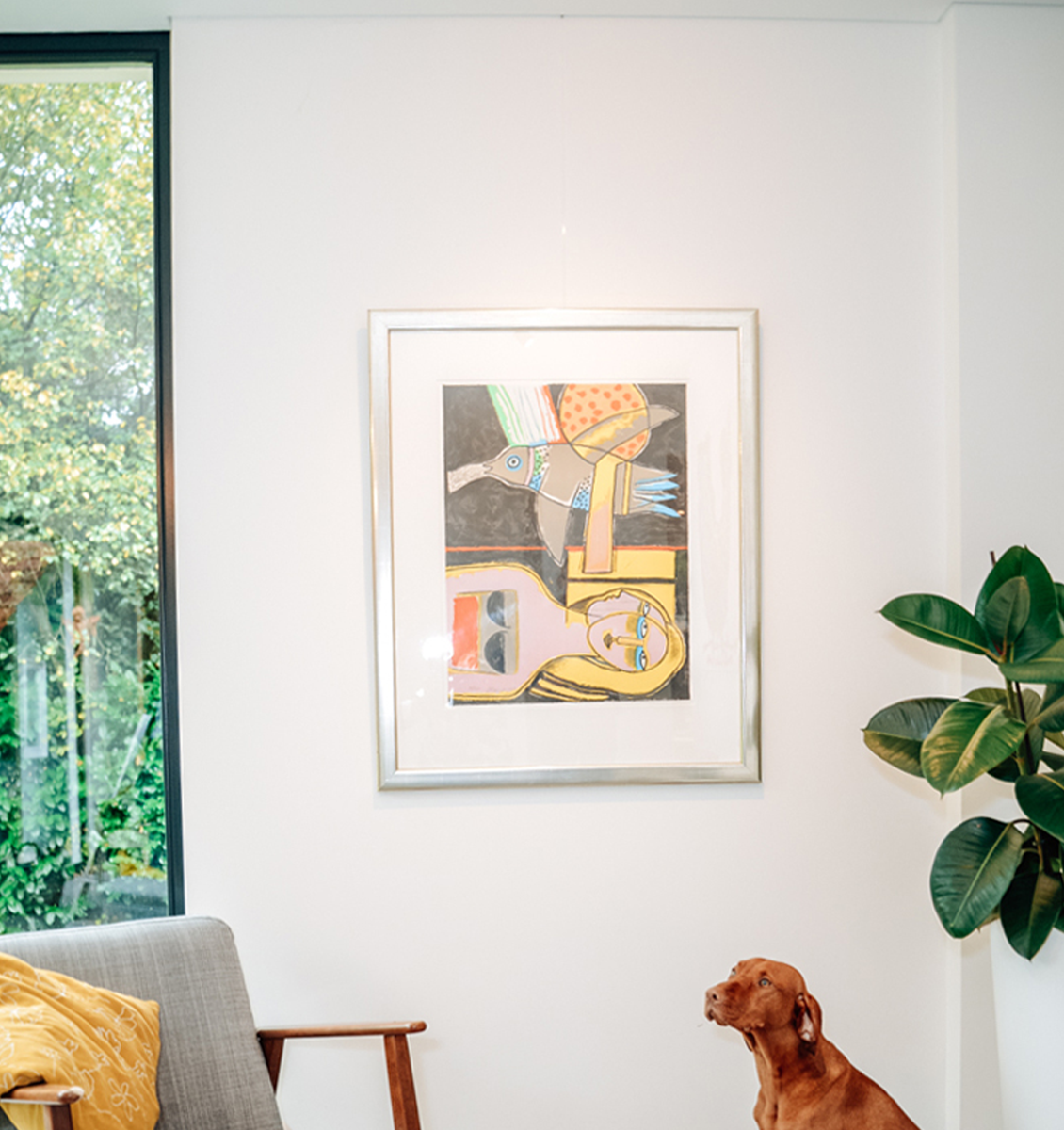 And in Bavon’s view, a flexible floor plan calls for a flexible wall system. He chose the Artiteq Shadowline Drywall integrated hanging system. “This system is fully integrated into the walls. You can only fit it when creating new walls and ceilings, and it gives an extremely clean-cut result. It is completely invisible. The only thing that you can see is the beautiful shadowline where the rails are located.”

Designing and building your own home

“Designing and building a new house from the ground up gives you the opportunity to think about things like skirting boards, heating, light systems and hanging systems,” says Bavon. “We had the opportunity to do it right the first time: timeless and completely concealed. And I am really pleased that we did this.”

Bavon physically built his own house, and he also installed the Artiteq Shadowline Drywall integrated hanging system independently, along with the plasterer. Bavon: “The system isn’t complicated, it is self-explanatory. It did require some work beforehand by the plasterer, but everything went well. The plasterer was also very pleased with the result. 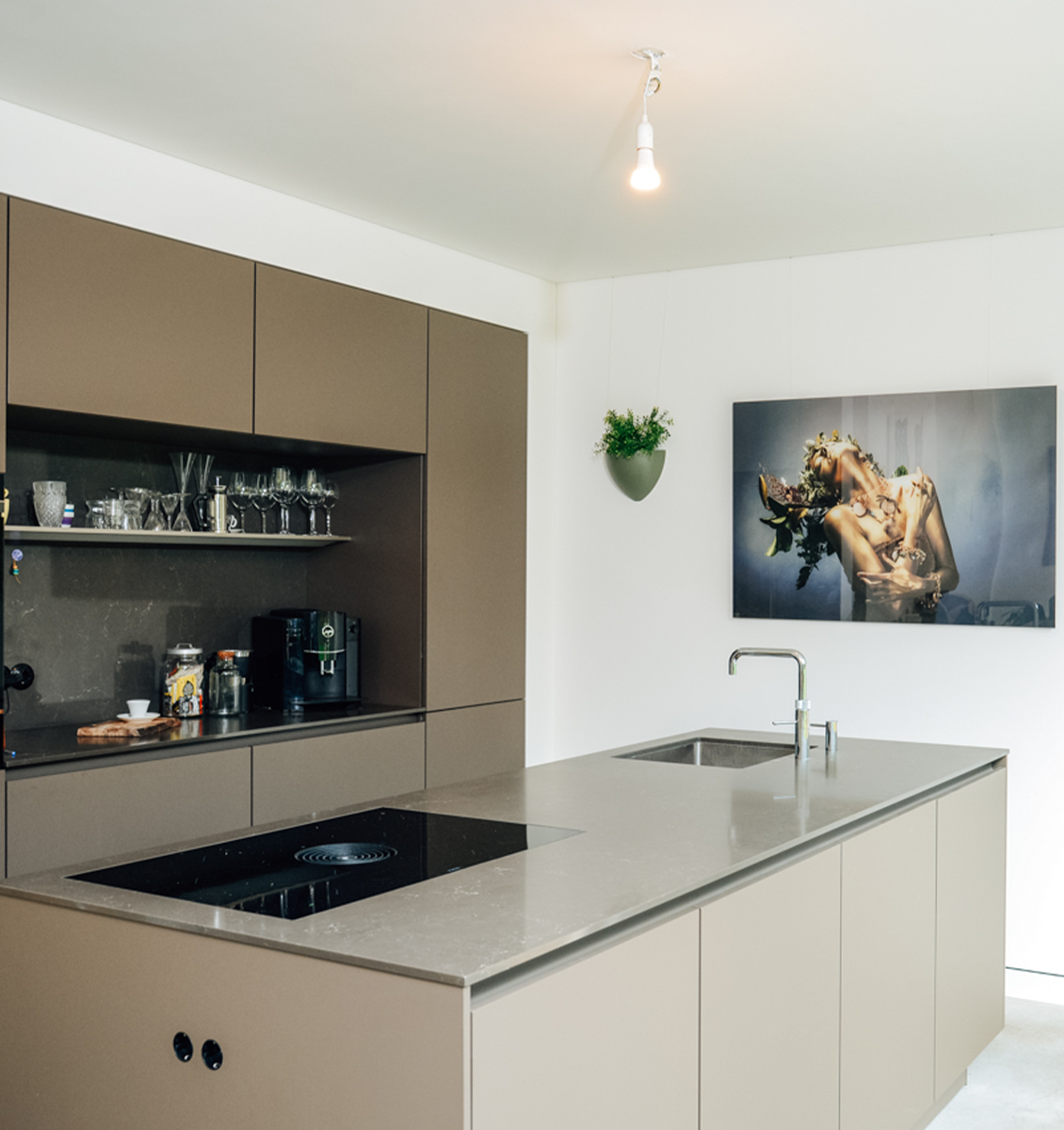 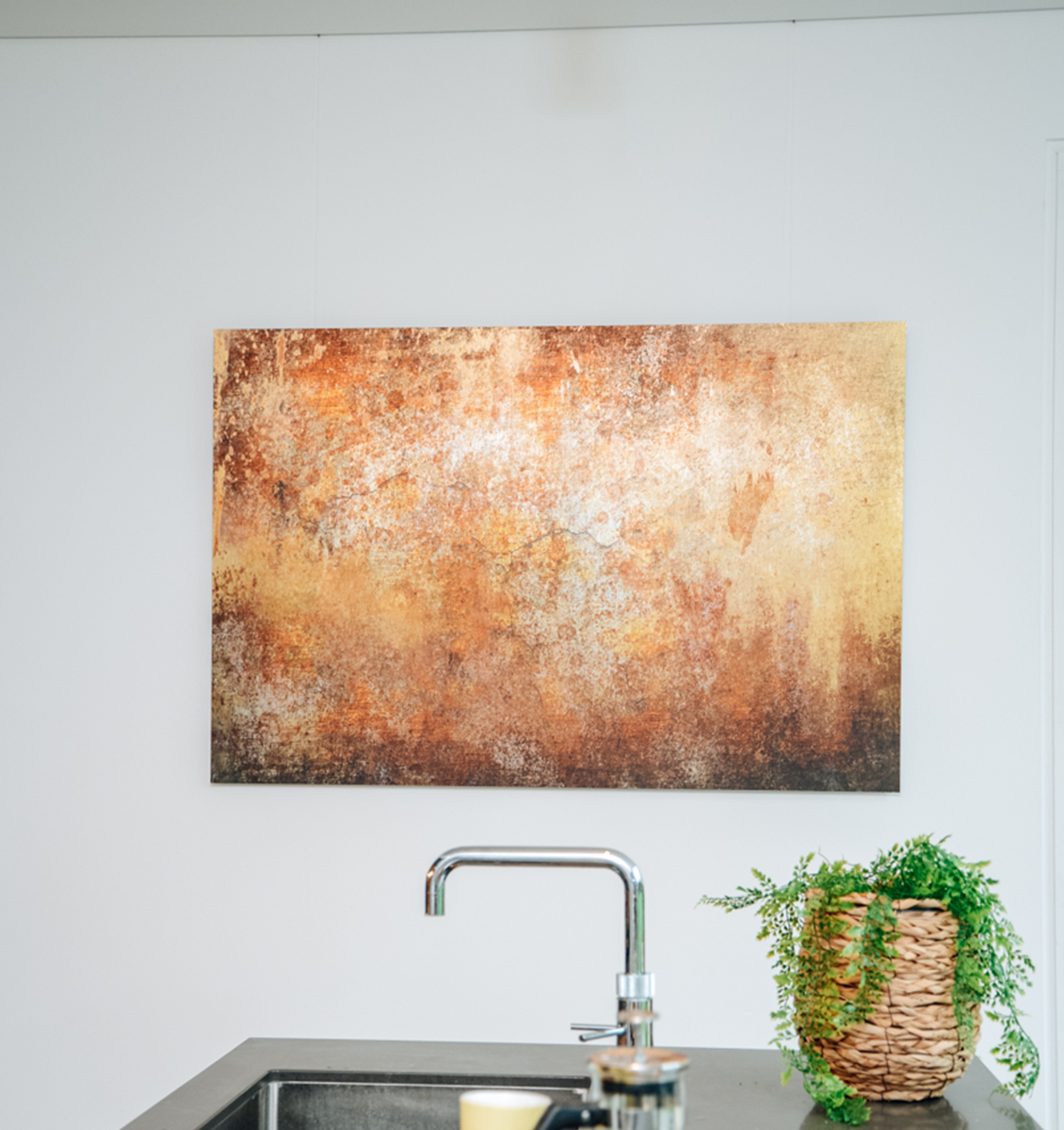 Bavon fitted the picture hanging system throughout his house. “The great thing about this system is that you combine functionality with aesthetics. We installed it consistently in every room of the house, including the toilet, bathroom and kitchen! That gives us complete flexibility. This system also prevents the familiar annoying cracking often seen in a plastered angle joint between the ceiling and wall.”

Bavon is also very happy with the ease of use. “I am extremely happy with the system. Not only is it suitable for classic large paintings, but also, for example, photos and other wall decorations. You can hang something ultrafast in very small corners, specific spots and in alcoves. If the rail is there anyway, you’re much more likely to hang something on it, as it doesn’t involve hammering in nails. And that makes it even more fun!” 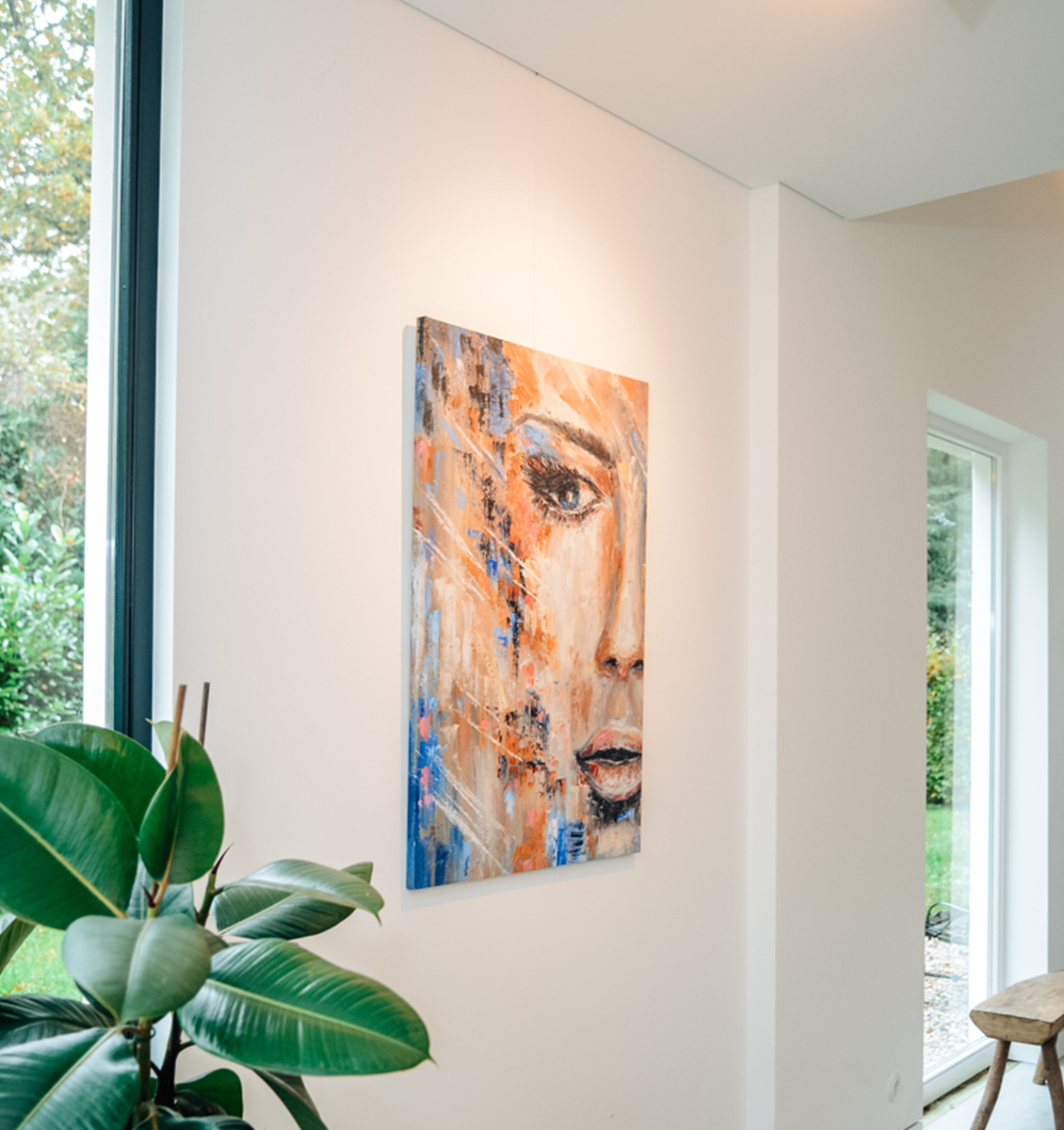 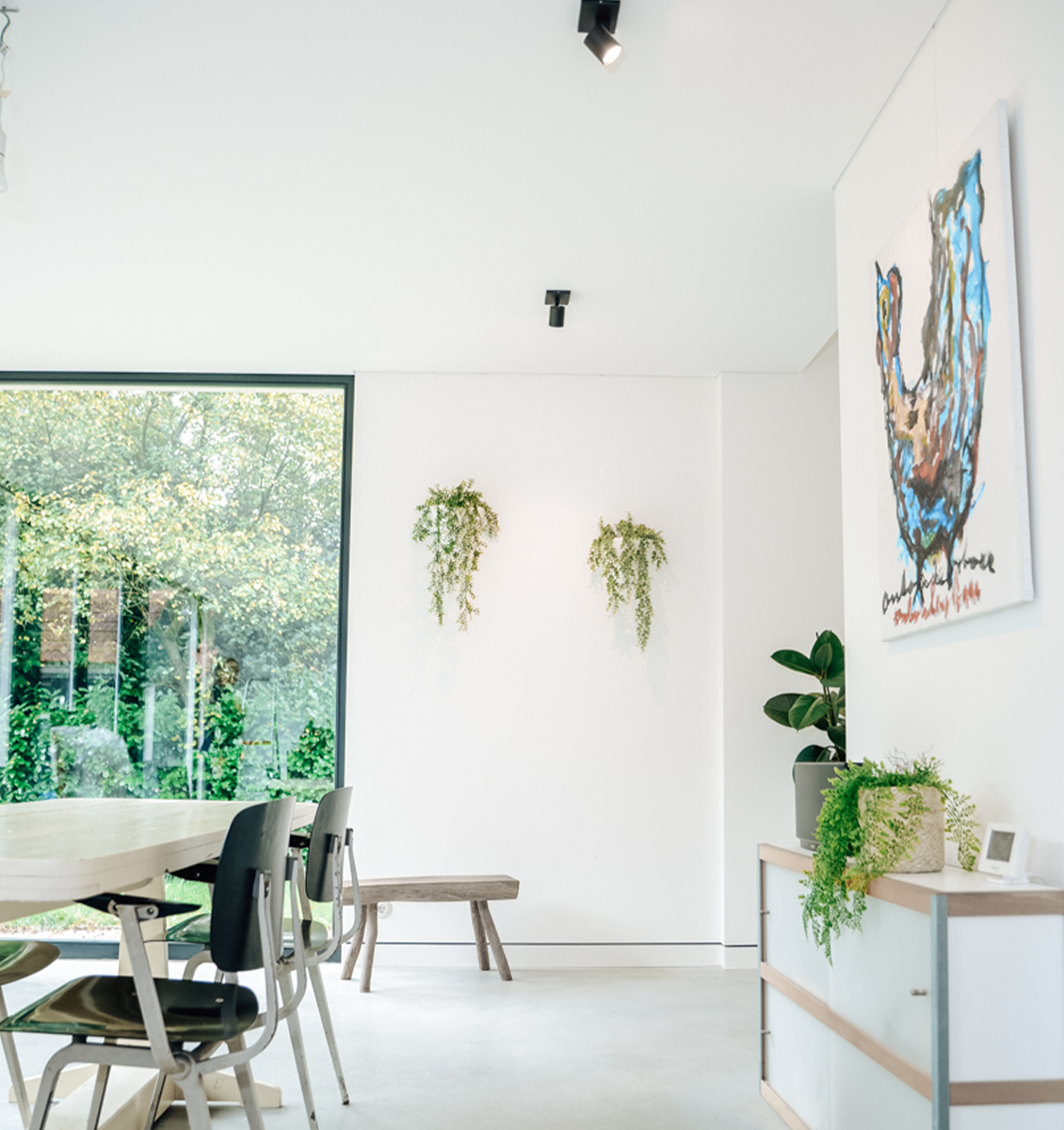 A streamlined and rich appearance

Bavon says that the picture hanging system presents numerous options from an aesthetic point of view: “It creates a really nice transition between wall and ceiling. The shadowline that is created gives a very streamlined and rich appearance. It makes a clear distinction between the ceiling and wall. This allows you to create, for example, a splendid contrast between the wall and ceiling with colour.”

A spot of interior design

Bavon wholeheartedly recommends the system to people planning to build their own home, or who plan to completely renovate their homes: “Relatively small things in the design of your house
can sometimes have a huge impact. This picture hanging system is a good example of that. When designing their interior, people often think of colour on the walls, or a beautiful rug. And when they think of hanging systems, functionality is at the top of their list.”

“But it is so much more than that. This really is a spot of interior design. A beautifully integrated picture hanging system changes your home at an aesthetic level. The effect is superb. The photos of our house speak for themselves, of course, but in real life the result is even more amazing. The shadow gap adds so much! I am really thrilled” 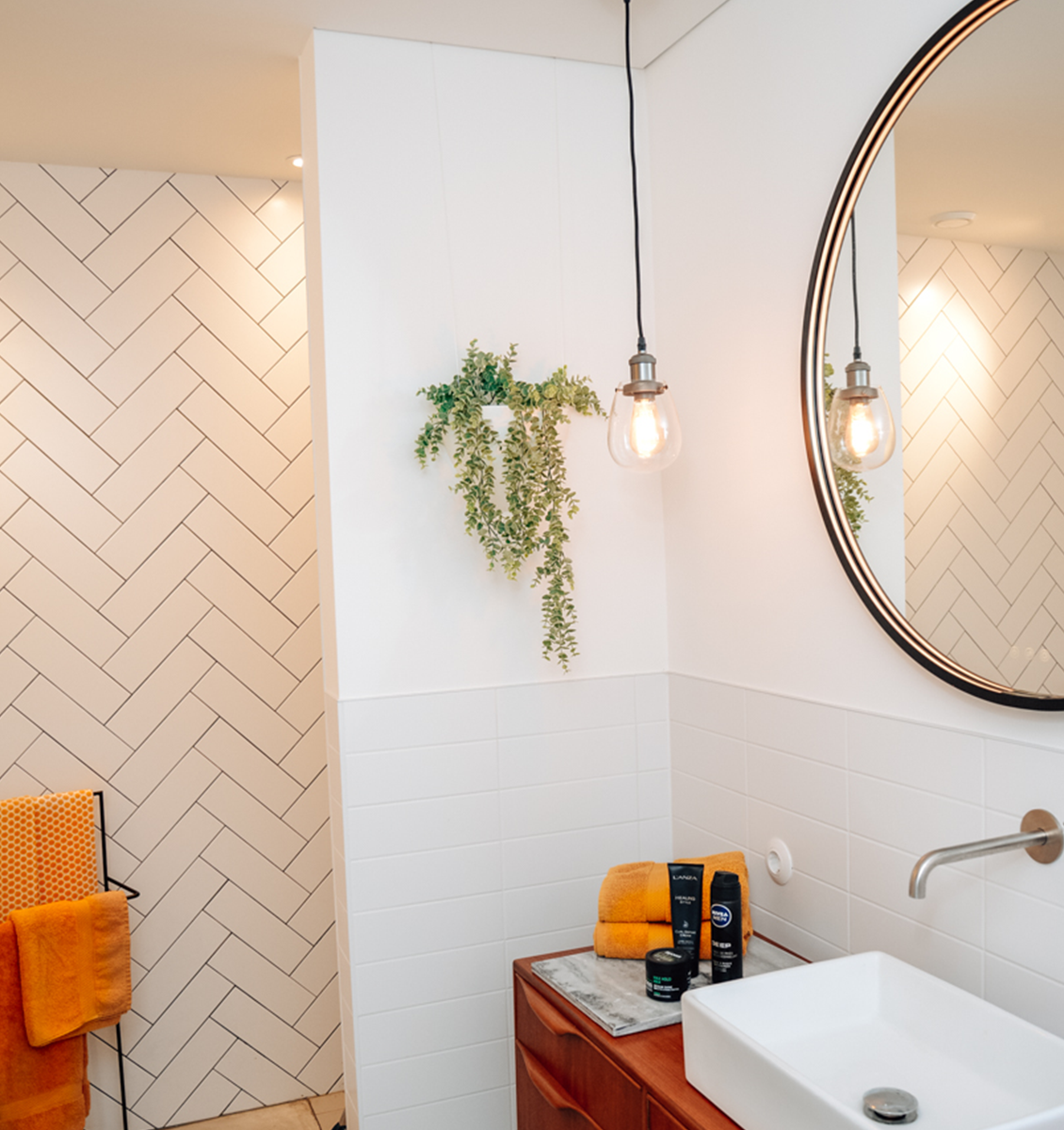 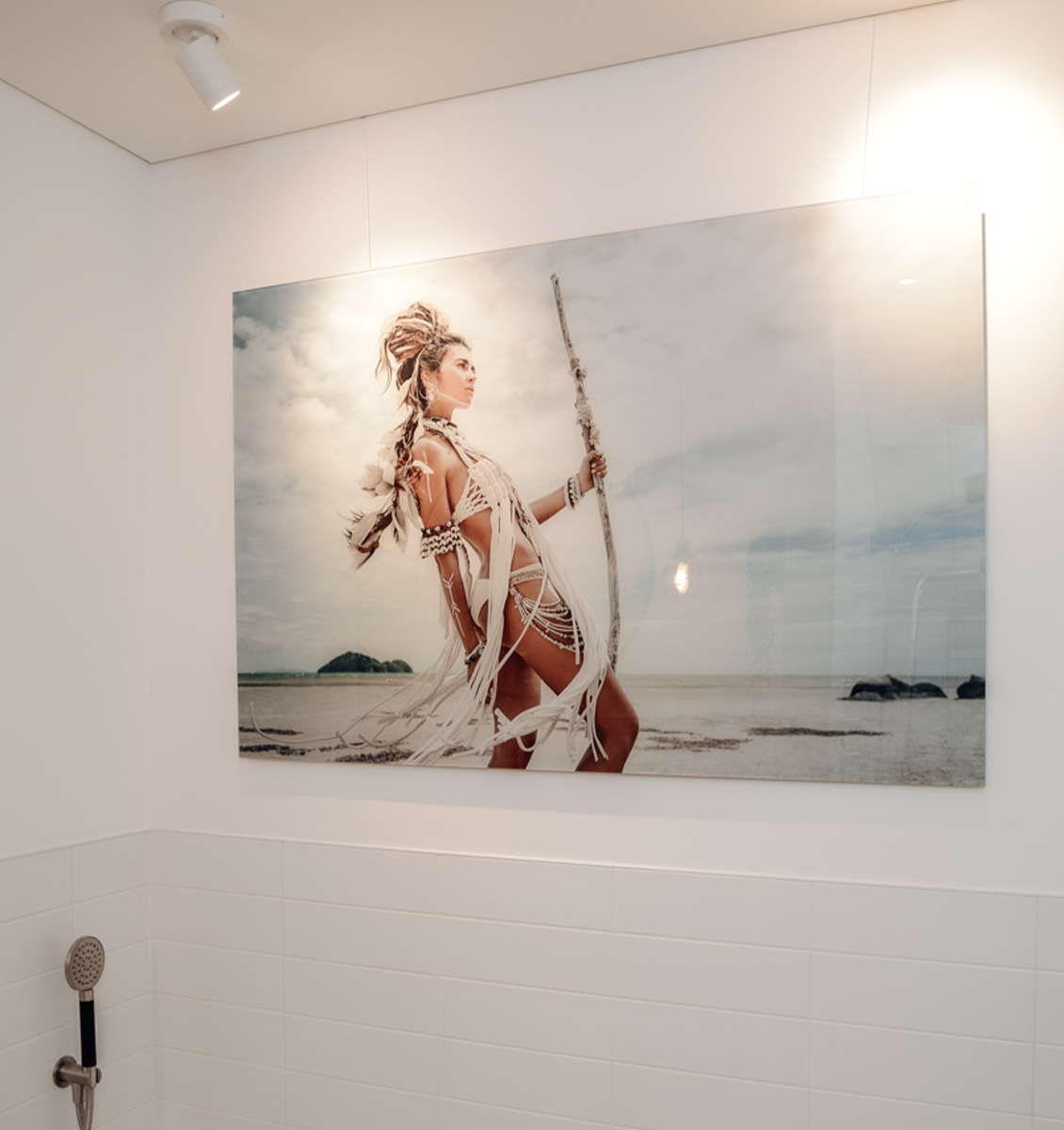